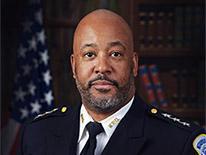 Patrol Chief Lamar Greene is currently serving as the Patrol Chief Patrol Services North (PSN), which includes the Second, Third, Fourth and Fifth Police Districts. Patrol Chief Greene offers more than two decades of law enforcement experience and expertise. He started his career as an officer in the Fifth District, a patrol sergeant in the Third District, and was then promoted to patrol lieutenant in the Fifth District. He served as the Executive Protection Unit Commanding Official from August 2005 to February 2006 where he provided protection for the Mayor of the District of Columbia and his family. He was appointed as an inspector assigned to the First District, and in 2007, he was appointed commander of the Fifth District Police Station where he successfully led the city in reducing crime by ten percent in 2008. He was awarded the Commander of the Year and Best Performing District Awards in 2009. Assistant Chief Greene also held a number of investigations roles, including lieutenant in the Violent Crimes Branch/Homicide Unit as well as managing district-level investigations at the Third District detective’s office. Most recently, he has been assistant chief of MPD’s Homeland Security Bureau where he oversaw all intelligence and operational functions to ensure that the District of Columbia is well-protected, and that the government prevents and prepares to respond to threats and critical incidents.

Patrol Chief Greene has received a list of awards such as the Life Saving Medal, the Sustained Superior Performance Award, the Homeland Security Emergency Management Agency (HSEMA) Special Service Medal (for sustained and noteworthy achievement in support of the mission of HSEMA), the U.S. Army Air Operation Group Certificate of Appreciation for outstanding support during the Safety Stand Down Day, and the Metropolitan Police Department’s very own Commander of the Year, as well as Best Performing District Awards while at the 5th District Police Station.

The Fifth District Citizens Advisory Council, Inc. is a District Of Columbia Corporation filed on April 25, 2006. The company’s filing status is listed as Active and its file number is 261253.

The Registered Agent on file for this company is Frances Penn and is located at 5th District Police Headquarters
1805 Bladensburg Rd, NE, Washington, DC 20002.